It’s been almost two weeks since my last post. I can’t say that I’ve had so much to do that I didn’t have time to blog but I can safely say that I had absolutely nothing worth putting pinkies to keyboard.

Hmmm. That sounds awfully negative, doesn’t it? Let’s see, what has been going on in my little world?

I went to SHRM. Big convention of HR folks. Walked, walked, and walked some more. Sat, sat, and sat some more. Ate, ate, and ate some more. Slept for about a minute.

What is it about hotel beds that makes it next to impossible to get comfortable enough to sleep? Is it that they’re too hard, or too soft,  too lumpy, or all of these things? I’m betting on all of them. The bed in my room this trip, though, was soft. Not good for my back which is why I’m sitting and walking a little bent over.

It’s really just a minor irritation but added to the swampland of emails I’ve waded through today, it’s been a cruel price to pay for four days away from the office.

Speaking of cruel prices to pay …

I had to board my cats while I was away. When I picked them up, the vet said that Ollie tried to murder Emily so he had to separate them to keep her safe. Ollie probably blamed her for being stuck at the vet’s for four days. Regardless, I can’t have one cat scared to death of the other one. Anybody want a cat?

He’s pretty. He has blue eyes. He only weighs about 15 pounds. And, he’s only mean to Emily … unless he wants in your lap. Then, he can be pretty ruthless, shoving his way on.

The bottom line is … 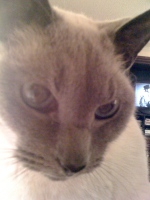 Emily has dibs on life at casa Good Old Girl. Isn’t she pretty? Such a sweet girl too! Only bites them that ask for it. I worked at home today and she’s been following me around. Ever since I got home yesterday, she hasn’t been more than a few feet away from me.

Seriously, Ollie is outa here if he doesn’t shape up and stop being a bully. Nobody likes a mean kitty.

Are you listening to me, Ollie? It’s way past time you learned to play well with others. You’re eleven years old for pity’s sake. 😉

I started the week on Sunday with my lovely daughter who took me to a birthday brunch then to a movie. She is the sweetest girl on the planet!

Monday brought me a milestone birthday (not tellin’ which one) and lunch with my baby sister. She gave me the coolest gift! Then, it was a quick trip to the Apple store where I gave myself an iPad, followed by a wonderful evening making art with my sister.

Tuesday, Wednesday, Thursday — back to work for this old girl.

Then, Friday comes around and the lovely jensinewall and the effervescent as long as I’m singing each sent me a One Lovely Blog Award.

Gotta’ tell you folks, life just doesn’t get much better. All I need now is about a pound of chocolate and a really good foot massage and I’m all set.

Okay, enough about me, on to the award rules!

This award(s) requires sharing 7 facts about yourself and nominating 15 co-bloggers you love and want to make happy with a well deserved token of gratitude. Here goes …

The blogs I nominate for the One Lovely Blog Award …

All of the above are lovely blogs and I hope you’ll visit each and every one of them and will enjoy them as much as I do.

Just when you least expect it, someone reaches in and grabs your heart and just won’t let go.

That happened to me a few decades ago when my baby sister was born. It happened again a few days ago when she gave me this birthday gift.

I’m not sure when she first started making collages, maybe in her teens, but she has for as long as I can remember. She creates them for loved ones and puts much of herself into every one she creates.

Making collages, when done well, is a painstaking process that takes hours of time and requires an artistic eye, as well as a spirit of adventure. Rosie is a talented artist with a husband and children and just starting her own business so just knowing that she took all the time needed to create the collage shown above — just for me– means more to me than I can ever adequately express.

And, then there is the content of this collage, I am amazed! In fact, it warms the cockles of this old girl’s heart and will for many years to come.