Ever wonder about what might have been?  I don’t very often but in the last few weeks have indulged in a romanticized trip down memory lane.

A friend from college recently mentioned via Facebook that a mutual friend from back then wasn’t doing very well. You see, the mutual friend was tucked way back in a cubbyhole in my brain as “the one that got away.” It’s a really long story and I won’t torture you with the details except to say that I always thought it was my own fault. I’ve carried around regret for years and, from time to time, wondered what might have been—until my friend and I took our conversation offline (yes, people do still have conversations outside of Facebook) and I learned more.

You see, I’ve always believed in fate, that things happen for a reason. Maybe not the things I want, much less the reason I want them, or when for that matter, but there is always a reason. As a result, I’ve pretty much strolled through life going with gut instinct. I learned early on that over-thinking big decisions leads me down the wrong path. Doesn’t matter what the decision is about. Whether it’s to pick up and move across the country or what color car to buy, if I over think it, it does not work out well for me. (I still, to this day, can’t fathom why I bought that gray car. I hated it. I hate gray. Yet, it seemed like such a good idea at the time.)

Hearing more about our friend, and how he’s conducted his life, brought an end to my little excursion down memory lane. You see, it turns out that if the “one that got away” hadn’t, I would have gotten what I wanted at the time, but would have regretted it year after year after year. That regretful reality would have been so much worse that my regretful “what might have been” illusion.

Which leads me to reprieve.

From where I sit now, it looks like that fateful day, regretful though it was at the time, was my reprieve from a lifetime of disillusion.

This happy camper’s big decision today is whether to go with dusting first or running the vacuum. H-m-m-m, my gut says read my new book.

There are some things in this world that just confound me. You know the kind of things I mean, for example:

Why is it that you always have a great hair day the day you have an appointment to get it cut?

Why does a neighbor always drop in on days when you really just want to be alone?

Why is it raining when you come out of the movie theater even though it was sunny when you went in and no rain was predicted?

Why do you always get stuck behind somebody going 10-15 miles under the speed limit only on the days when you’re late for work?

Why is there no such thing as a perfectly made new car, or new appliance, or new electronic device, or new anything for that matter? 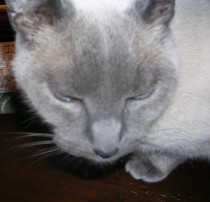 Why does my cat Emmie always (and yes, I mean always) toss her cookies on my bed’s newly washed coverlet?

And why, for the love of all God‘s creatures, is it that March 2012 is the warmest March on record but April 2012 is as chilly and dreary as it can get?

When I was a kid, my life calendar was all about the next holiday and not having to go to school.

It wasn’t so much that I didn’t want to go to school but that I didn’t want to have to get up so dang early. (They could have made school start at ten instead of eight and I’d’ve been a happy camper.) The getting up early, though, wouldn’t have been such a problem except that it interfered with staying up late the night before. So why does a kid need to stay up so late — it’s all about the books.

Yep, this girl’s a reader. My life calendar these days is measured in books instead of days and weeks.

And holidays? They’re just one more opportunity for a family squabble, so who needs ’em!

I can’t remember a time in my life when I wasn’t holed up somewhere reading a book. It drove my grandmother bonkers. She hated to see me inside reading when my brother and sisters and cousins were out playing. She used to make me watch afternoon soap operas with her to keep me from reading but I’d have an open book across my lap, sneaking peeks and distracting her when I needed to turn the page. (I’m pretty sure she knew I was doing it but, as long as I kept up with the soaps’ story lines, she let me get a way with it.) Granny loved her soaps. Wonder what she’d have thought about blogging.

I read while I should be watching what I’m cooking on the stove. (I’ve developed a real affinity for charred food.)

It’s a sickness, this book thing, and there is no cure.

What is your passion? What keeps you going day after day, year in and year out? What’s the big thing on your life calendar?