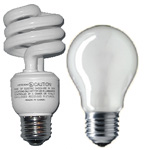 In 2007, George W. Bush signed into law the Energy Independence and Security ACT (EISA). This law set an efficiency standard for light bulbs with the first phase going into effect in 2012. I’m not going to bore you with a lot of info about the why’s and wherefore’s of this new law. I’ll just say that it appears that our elected officials were making a valiant effort to conserve our natural resources and let it go at that.

I have problems, however, with this new law — aside from the fact that I don’t like the Feds telling me what kind of light bulbs I can use.

Now, before all you environmentalists, including my own daughter, start yammering about the efficiency of compact fluorescent bulbs (CFLs) and what a jerk I am for mourning the demise of the incandescent bulb, let me state, for the record, that I’m fine with CFLs. I use CFLs. In some places. Like closets and porches and places where ambient light is appropriate and the laundry closet. (Oh, I already said closets, didn’t I?)

But, I have some issues. For example:

When CFLs first hit the scene a few years ago, I was excited about it. A new light bulb that would save energy and last much, much longer! I bought ’em, compared ’em. Now, not so excited. Incandescent bulbs created more light than the same watt CFL bulb. How much light a bulb emits is important to me. I read. A lot. And I need good light to do that until the wee hours of the morning. Why? Because I have something like 20-80 vision. Glasses help of course, but the cataracts make it more difficult. (I am having surgery to fix that little problem in a few weeks so maybe that’s not a valid argument.)

Incandescent bulbs are dirt cheap. CFLs, not so cheap. I’ve heard the arguments about how CFLs save money in the long run but I tested that when CFLs first came out, and I’m just not convinced. I am willing to concede, however, that there may have been improvements in the last 5-7 years, so maybe I need to retest. We’ll see.

Incandescent bulbs put out heat. My cats like sitting on the table with their little heads close to a warm light bulb. CFLs won’t keep their little ears toasty. And I’m pretty sure Ollie’s sinuses will stop-up permanently if he can’t melt them with heat from my reading lamp.  Aside from that, if the lamps are putting out heat, then my actual heating bill should be less. Right?

I have lamps (lots of lamps, well, three) with clip-on shades. Ever tried to get one to clip onto a CFL bulb? I have. It doesn’t work.

There is movement in Congress to delay the implementation of the EISA. It will be interesting to see what happens.

Will my clip-on shades survive the light bulb debacle of 2012?

Pssst, see that pic above? The one with the two light bulbs? That big ol CFL bulb wouldn’t allow the glass cover to go back over the light fixture in my closet so I had to leave it bare-bulb just to be more “green.”